I’ll say this to start things off; I don’t think we EVER got to see the extent of the Demon King’s power.

When he first appears and combats the Z-Fighters on the cliff, he kills Kibito with one Ki blast to the face, turns Piccolo and Krillin to stone, dodges Goku’s attempt to attack him and blocks all of Vegeta’s punches.

Later on, Vegeta mentions that he doesn’t see him as the threat that Supreme Kai is making him out to be. He says that if he could just avoid his Stone Spit then he knew that he could beat him.

Goku takes it a step further and says that he is in the same power range as Perfect Cell; note he was not referring to Super Perfect Cell just his Perfect form which was below Super Saiyan 2 Gohan. He tells Shin, that if it had been 7 years ago that Dabura might make them nervous.

After Yakon’s defeat, he reassures Babidi that even if Goku and the other’s kili reading was 4,000 it would not be enough to destroy him. Full Power Super Saiyan Goku’s kili measurement was 3,000 meaning that he would be more powerful than Goku as a FPSSJ.

*Majin Vegeta is practically Vegeta as a Super Saiyan 2 just “brainwashed” by Babidi and he was EQUAL to Super Saiyan 2 Goku meaning that his kili reading would most likely be 6,000 as well*

So, Goku was assessing Dabura’s power level to Cell just from their scuffle outside of the ship.

Before fighting Gohan, he went into the meditation room and as Babidi puts it the room helps him focus his already incredible fighting power; potentially meaning that Dabura is even MORE powerful when he fights Gohan meaning that he might be above Goku’s initial prediction of his power.

When he fights Gohan, he quickly overwhelms his base form but after powering up as a Super Saiyan 2, he starts to be on the receiving end of the attacks.

It was only until Gohan taunts him into using his full force does Dabura pick up the pacing. Before he powers up, he tells Gohan that he was give him “a taste” of his full power.

After powering up, he fights on par with Gohan but as the match goes on he is the one taking over the fight. Gohan’s lack of training and as Vegeta put it, he’s also lost his fighting sense and Goku agrees because he was making simple mistakes during the fight. Dabura says that he feels Gohan’s Ki dropping and it is made apparent with him using up more energy running around trying to keep up with Dabura than actually fighting.

You could really tell he was struggling especially after he caught and broke Dabura’s sword, it took a lot out of him. I know your probably thinking that since Gohan won that struggle that he is more powerful than Dabura. BUT you have to look at two details;

Dabura then quits the match in favor of Vegeta being the one to finish the job of gathering the energy for Buu’s ball. So, if I were to make a prediction; if the match went on until either he or Super Saiyan 2 Gohan won, I’d cast my vote on Dabura winning.

There was so much going for him that made him overwhelm the Super Saiyan 2. With most of his advantage over Gohan being his element of surprise giving him an upper hand along with Gohan’s skills being rusty. 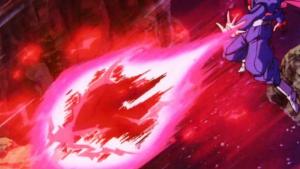 Now we don’t get to see him in action again until after Buu takes him out with an eye gouge and a kick that sends him hurtling into a cliff with Babidi (with glee) commenting that he probably killed him (wow talk about a severance package…).

He then reemerges to fight Buu with a spear that does nothing due to his regeneration power. I have to admit that Dabura put up a pretty good fight despite being heavily wounded. Goten and Trunks were watching commenting on how scary his Ki was when he was powering up to use the Full Power Energy Blast Volley on Buu (Which did no damage to Buu at all, he came out of the smoke with a smile…). In the end, he is turned into a cookie and eaten.

The only other time we see him is in a flashback when Yemma tells Goku about his trip to the Check-In station, he fights off some of Yemma’s workers but is flattened by his “stamp of approval” sending him to Heaven due to him being from the Demon World meaning that he’d enjoy Hell.

So, we really don’t see Dabura’s 100%; he held back against Gohan and when he was fighting Majin Buu, he was heavily damaged. I think it is safe to say that he would not be able to stand up to Super Saiyan 2 Goku and Vegeta but could take down Super Saiyan 2 Gohan.

Now, do I think he could defeat Cell Saga Super Saiyan 2 Gohan; I’d say no.

Remember Gohan was weaker than his Cell Saga persona but I don’t think by THAT much. There were 3 things that his “teen-self” had that his “adult-self” didn’t; more power, control and fighting sense. All 3 of them because rusty from not training for 7 years and he suffered from it.

Majin Vegeta (who is equal to SS2 Goku) tells Goku that he is pleased that he is more powerful than Gohan was when he killed Cell meaning that Dabura (who I figured is not able to defeat Cell Saga SS2 Gohan) would lose to those 2 pure blooded Saiyan as SS2s.

He is without a doubt a very powerful fighter but I think he’d lose to Cell due to the Android having the advantage of regeneration on his side. The Demon King is pretty much done for if he suffers a fatal blow.

What do you think?

2 thoughts on “Dragonball Z: How Strong Is Dabura?”